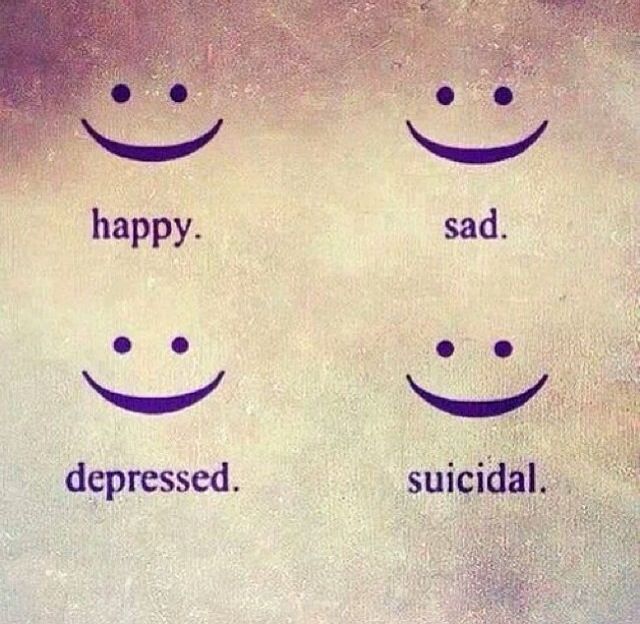 Something cropped up recently; related to the fact I write this blog and the social media accounts that go with it.

Apparently, there are people that think I’ve been fine for ages. ‘Why is she not at work?’ There’s been a few major knocks to my wellbeing in the last few days, but finding this out has really added to the burden. I already feel weak, pathetic, guilty and ashamed. I already feel like I don’t have any right to have this diagnosis as my life is pretty good really, in theory. I already feel like a fraud; there’s no diagnostic test as such and I can’t prove it. It still doesn’t feel as ‘real’ as clear objective physical diagnoses are. I can’t believe it’s me it applies to; I never thought it would. That said, other people that know me well ‘in real life’ knew what was wrong, even before I fully recognised and accepted it. Somebody that has been there himself in the past said he could see it in my eyes. It’s other people that told me I wasn’t fit to be at work. It’s Health Professionals that have prevented my return as I haven’t been ready. Not me. It is real. But now, I feel I must defend myself.

Well, here’s the thing. Depression, (along with other health conditions including my physical chronic condition), is often an ‘invisible illness.’

What am I ‘supposed’ to look like? Just lie in bed all day and mope? Cry all the time? Look miserable 24/7? Whinge and moan? Do absolutely nothing? Never smile or laugh? This is how it was in the beginning when I first went off work. Some days ARE like that, at least in part, even now. Today is like that, having had a massive blow earlier today. Apart from having to manage the children. As soon as my husband came home from work, I retreated and have withdrawn – as usual when down. And started what I always feel compelled to do when I want to run away from my own mind but can’t…write.

What do I actually look like – to the outside world? I appear to now be functioning to a relatively normal level. I give myself targets, of varying degrees, every day. After all, this is not something you get better from passively; it needs work. I go out intermittently. I look after the children. I prepare food – occasionally. I do household chores – albeit in small chunks and stages. In the last few months, I have hemmed some curtains, decorated most of the walls of one room (not yet complete), painted a tiny bit of another room, done a few things to make home function better and feel nicer otherwise and played my musical instruments a handful of times. Each of these things has been done in tiny snippets of time over days and weeks as lack of energy and motivation hasn’t allowed more than that; much to my frustration. Each of these things have been done to try and help me get better; things that felt necessary to improve my wellbeing. Is that really that much to achieve over nearly 5 months that can be equated to being properly at work?! I think not….

Now and again, I even smile and laugh! Goodness…I must be fine then surely?! Apart from when I hit crisis point in September and could no longer hide it, I have always been someone to face the outside world and hide what is inside; not necessarily deliberately but instinctively. It’s just what I have always done; it almost feels like correct etiquette to not expose other people to your troubles and negative emotions. There have been occasions when something upsetting has happened before work and I’m churning inside; but no-one would have known. A normal day became a version of me where I would be animated at work, or anywhere else in company, then walk through the front door and let all that false happiness and energy fall away. I didn’t have to put on a show for anyone then.

And guess what? People with depression DO smile and laugh sometimes; it doesn’t mean they are making it up…. does this link help to realise that? (It is often termed ‘Smiling depression.’) The actor Robin Williams is a perfect example of a cheery exterior with inner pain. For the first few weeks after I stopped work, there was no smiling. There was nothing. Emptiness. Apathy. Nothing mattered anymore; I didn’t care. I curled up and stayed there for days on end. It didn’t take long in the grand scheme of things to return to my instinctive ‘face for the world’ despite only being in the early stages of recovery. Behind closed doors, it was another story.

What do I actually look like – in private? A mess a lot of the time! I still avoid going out more than I have to. I don’t want to interact with other people very often. I yearn for solitude and silence. I push myself to do the things I do as I know I have to to make progress. I generally do the bare minimum to get by. If I don’t pace myself properly and do more, I usually then end up being very flat and unproductive; almost as if I only have so much battery-power over a period of time and have to choose how to use it….a friend recently told me about the ‘Spoon Theory’ which is also a nice analogy along these lines although about a different condition.

Do I usually actively demonstrate the everyday challenges? No…well not completely. Seeing as the blogs have been written intermittently for the last few months revealing my inner feelings then, if you have read the blogs, you will know some of this. There has been the odd thing that implies it like the book about communicating with small children and the ‘SAD’-based posts. Maybe people that think I’ve been OK have chosen to ignore the things I have posted that show the struggles and only noticed the better bits? No….I do not routinely post on social media about things that have been challenging or made me unhappy. What’s the point? Do you really want to see my red face and puffy eyes when I’ve sobbed for several hours? Do you want evidence of the times that I can’t cope and take myself off and curl up on my own with my hands over my ears? Do you want me to tell you when I am wide awake in the middle of the night restless with chaotic thoughts? I doubt it….nobody wants to see that.

Don’t forget the social media facade: A lot of what you see about somebody on social media is a illusion. How many of us feel fed up of seeing everybody else’s perfect lives when we are struggling with our own? But….they don’t have perfect lives either. It’s just that most of us don’t tend to broadcast our personal troubles to the world; only the good bits.

The ambiguity of the written word: I learnt my lesson on this many years ago and have seen it cause problems numerous times since. Without intonation of speech and body language, things can come across very differently from how they are intended.

Going back to an earlier blog about being so open (Brave? Or stupid?), maybe it is latter after all? I have continued with these things for my own benefit and because others have been grateful for it. I have even formed friendships through it. What started as writing as my own therapy has developed into a support network for others too and may develop further in future. This has given me a sense of purpose over the last few months which has significantly aided my recovery. The idea that general wellbeing and GP health etc could become part of my future career has given me a new surge of interest in being a doctor; and I needed that.

So, don’t assume somebody that is smiling is OK. You don’t know what pain is inside.

4 thoughts on “What does ‘Depression’ look like? – from the outside…”