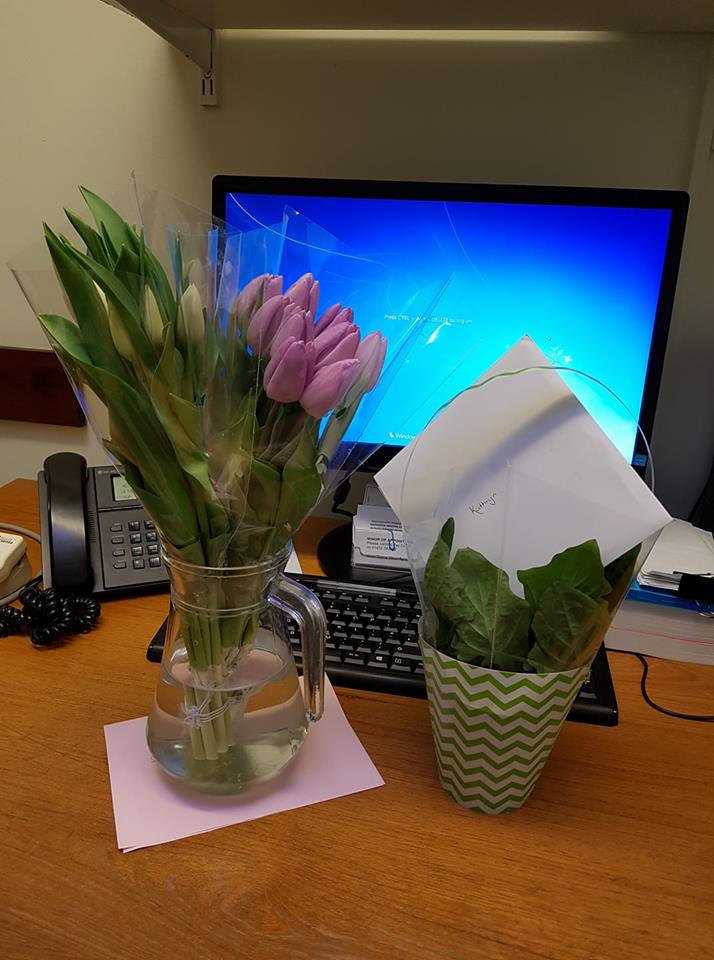 Today was the day; return to work. There’s been an odd mix of feelings in the run up to today and during the day.

I was inevitably nervous; mostly through doubting my ability to remember what to do and cope with it. I was also worried about seeing all the staff again properly (although I have been into work a bit over the last few weeks); I can’t help but feel weak, pathetic, ashamed and embarrassed despite knowing I shouldn’t, in theory.

I couldn’t have asked for a warmer welcome; everybody was extremely supportive. A couple of little gifts were waiting for me on the desk which was lovely.

So, I got logged in, made a cup of tea and prepared for the first patient. Minor palpitations ensued as I saw the screen show that they had checked in. I opened their notes. Then paused and took deep breaths. I still didn’t feel ready to do the job again and I still didn’t really want to. I still savour the times of solitude and silence (especially at home) and struggle to tolerate the ‘noise and demands’ I’ve previously mentioned on a few occasions! This is mostly as home is as full-on as ever from this perspective with the children. So any additional interactions requiring me to listen to other people’s problems and potentially give of myself feels daunting and makes me want to shy away from it; which I hate having always been someone to selflessly put others first (but look where that got me). The self-preservation bit is clearly still instinctively working within me…something I will have to learn more about and apply in a balanced way in future.

Before I knew it, I’d found myself spieling off an explanation that was evidently still somewhere inside my subconscious. I only had 4 patients today; the practice have been wonderful at making sure I don’t throw myself in too hard and too quickly (as I am prone to do with most things!). The last one was fairly complicated and took ages; had this been in the middle of a normal surgery made up of 10 minute appointments, it would have made me quite stressed due to making other patients wait longer which often causes disgruntled grumbles (the consultation took about half an hour).

But, it was fine. I did it. And I didn’t notice that I was doing it or wish they would go away! (As I had ended up feeling about patients before I went off.) I glanced at the appointment screen to see how the other doctors were doing. This made me feel a bit panicky; the idea of seeing a ‘full’ number of patients again on a non-stop pressured rollercoaster of 10 minute intervals (which is almost impossible to keep to). But…I mustn’t think that way. I’ll be working back up gradually and hopefully developing techniques for managing better in future.

Once they’d all left and everything was written up and the corresponding jobs done, I automatically did what I have always done; checked for blood results, incoming letters and prescriptions to do (rather lacking so far of course!). Autopilot had kicked in – I started to feel like I’d never been away! I then decided to tackle the instant messaging system we have in case there was anything important I should know. Only 342 messages to get through!! I read through all of them and managed to delete or save just over 300 before deciding enough was enough for one day!

Once home, I landed in a heap on the sofa and didn’t really move for the rest of the day; intermittently shutting my eyes in a semi-dozing state. How can I be so tired again?! Did I really expend that much energy just seeing 4 patients?! As much as I absolutely loved Sunday (The CBSO day referred to in Music: Therapy Like No Other), it was hard work and emotionally intensive (mostly in a good way!). Maybe it’s that catching up with me a bit too. This fatigue is my biggest worry about getting back up to full GP days; they are TOUGH LONG days!

Overall, it felt positive to slot back into a ‘normal’ routine and go somewhere that means I am properly part of the outside world again. In a functional and contributory way. No, I didn’t feel ready as such, but it was the right time for several reasons. Any longer off would have started to backfire on my progress back to full wellbeing.

Now, I’m looking forward to a full day off tomorrow…already!

But, actually, it was fine. I’ll get there…one step at a time.